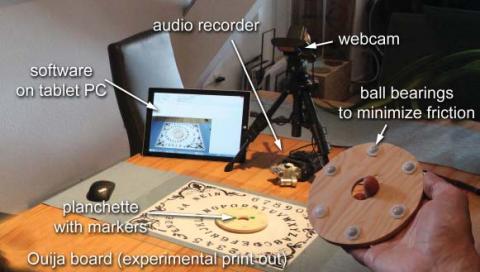 Ouija boards have been used as a tool to allegedly communicate with non-physical beings for more than 100 years, but little research has been done to explore the nature of this mysterious phenomenon. In an article published in the June 30 issue of the Journal of Scientific Exploration, Dr. Eckhard Kruse, an applied computer scientist at Baden-Wuerttemberg Cooperative State University in Germany, presents a camera- and software-based system that can serve as a tool for Ouija research.

Most scientists have dismissed Ouija communication as an example of the ideomotor effect—that is, Ouija sitters’ thoughts trigger tiny muscular motions, and through a feedback loop, these motions become strong enough to move the planchette without the sitters realizing that they directed the movement. However, little research exists to support this idea, and the ideomotor effect cannot explain the complex nature of Ouija messages and their content or account for potential psi (“psychic”) effects.

Kruse’s tracking system, which may yield insights into ideomotor action and other dynamics of Ouija communication, utilizes a webcam and Java-based software to detect the position and motion of two colored dots on the planchette, allowing letters to be detected in real time. Audio data (the sitters’ spoken questions) are also incorporated. In addition, Kruse designed sensors to detect the pressure and movement of fingers on the planchette. He has tested his system in more than 50 Ouija sessions.

What can researchers discover with Kruse’s tracking system? First, they can calculate the speed and acceleration of the planchette, and the forces required to accelerate it. These data can be used, for example, to assess whether spelling speed changes with the “guessability” of a letter. In the middle of a word in which the next letter could easily be guessed, spelling might speed up if the sitters are fully responsible for the planchette motions. Kruse’s preliminary data show no such correlation, suggesting another force might be at play.

Researchers might also assess the quality of the motion, such as generation of loops, to differentiate between volitional and unconscious movement. In one trial, the motion path differed when the alphabet was spelled intentionally versus unexpectedly during a session.

By observing changes in the angular velocity of the planchette, researchers might determine whether two sitters are acting synchronously as opposed to one sitter guiding the motion. The touch sensors can yield similar clues: Does the sitter’s finger move first, or the planchette? Do both sitters’ fingers move simultaneously?

Furthermore, Kruse’s system would allow researchers to build and analyze a database of Ouija-produced texts. Perhaps linguistic analysis of lexis, grammar, and semantics could be used to identify authors. Finally, with automatic tracking and verbal feedback provided as letters are spelled, the Ouija process could be completed with the sitters blindfolded, opening additional avenues for research.

For more details on Kruse’s tracking system, the entire article is available through the open access Journal of Scientific Exploration, Volume 33, Issue 2.