First Meeting of the SSE-Japan Chapter 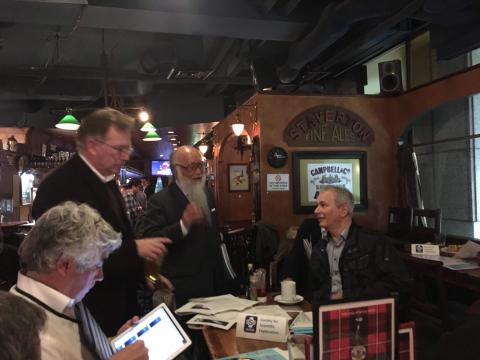 The first SSE-Japan Chapter meeting was held on February 6, 2019 at Roppongi Hobgoblins Pub. Seventeen people were in attendance, and of the attendees, slightly more than half held a university level science-focused education, and at least six attendees had a Ph.D.

Each attendee gave a brief self-introduction, and from the survey provided, priority topics of interest to the group included Alternative Realities, Consciousness, Alternative Energy, Quantum Mechanics, Spirituality, God Theory and Ufology.
The Chairman Paul E. Cizdziel, Ph.D. talked about the SSE organization, SSE philosophy, membership benefits, the Journal of Scientific Exploration, EdgeScience magazine and the 2019 conference. It was emphasized that all should officially enroll online to the SSE to help further the Society`s philosophy and agenda in Japan.

Some focused discussion was held regarding the latest issue of EdgeScience, where remote viewing expert and teacher Stephen Schwartz detailed a 2003 experiment designed and executed to assist in finding the location of Saddam Hussein. This was a topic of particular curiosity to the Chairman who described the report.

Many attendees who joined the meeting had at some time had observed or experienced unexplainable phenomenon that made a significant impression on them, and partially accounted for their interest in the SSE. The next meeting of the SSE-Japan Chapter is scheduled for Tuesday, March 5th 6:30-8pm at the National Institute of Informatics (2 Chome-1-２ Hitotsubashi, Chiyoda-ku · Tōkyō-to). Attendees will be given an opportunity to talk about their own exceptional experiences (voluntary participation) and how or why that affected them.