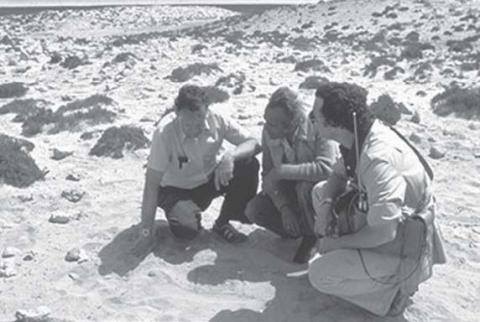 The 1979 discovery by remote viewers of an ancient Byzantine building buried beneath the Egyptian desert, led by Mobius Group director Stephan Schwartz, finally receives the proper publication it deserves in the Fall 2019 issue of the Journal for Scientific Exploration. At a site that was previously subjected to a methodical electronic search that yielded no evidence of any structures below, two remote viewers identified the precise location and orientation of a building along with details about decorations and other features that would be found within.

Schwartz is one of the developers of modern remote viewing, a formalized protocol for accessing nonlocal information about people, places, objects, or events that are shielded from detection by the ordinary senses. To better study this phenomenon, he developed a rigorously controlled, properly blinded and documented consensus application protocol for use in archaeology and other practical situations, allowing a meticulous point-by-point assessment of the viewers’ accuracy.

His approach uses a team of anywhere from two to thirteen remote viewers who are independently asked the same questions. He focuses on observations that are either consensually reported or have a low a priori probability of being mentioned at all in order to reduce analytical “noise.” Schwartz’s consensus protocol was first demonstrated in Project Deep Quest, the successful location and reconstruction of a shipwreck off the coast of Catalina Island in California carried out in conjunction with the University of Southern California’s Institute for Marine and Coastal Studies.

Next, Schwartz experimented in Marea, an ancient resort center which now lies hidden beneath the desert 44 km southwest of the Egyptian city of Alexandria. What made the area attractive to Schwartz was that it had been surveyed three years previous by the University of Guelph, using electronic remote sensing and other search methodologies including aerial photography, a topological survey, and a proton precession magnetometer. That published data set provided an opportunity to compare the results of electronic sensing with remote viewing in locating archaeological sites.

For the Marea project, two remote viewers, George McMullen and Hella Hammid, were independently asked to identify the location and features of a building and describe any artifacts inside. McMullen identified several sites, and one plot was selected for further study. Hammid was brought to the same site, and independently, both viewers gave their impressions of what would be found beneath.

Remarkably, excavation revealed that the viewers had correctly pinpointed four corners and a doorway of the building within inches of their actual locations. Despite some “misses,” which Schwartz says might have been avoided by asking clearer questions, the great majority of the predicted details were accurate, including the depth at which the walls would be uncovered, the Byzantine origin of the building, and the precise location of a freestanding cylindrical clay column.

Given that remote viewing can offer clues about what lies beneath the ground where electronic sensing has failed to do so, will its use in locating archaeological sites ever become widespread? Schwartz believes the answer depends on whether archaeologists can set aside preconceived notions and, instead, honestly examine the potential that remote viewing can offer to the field.

By publishing this research in an indexed, open-access journal, Schwartz has made this research available to a larger, international audience—a task that would have been impossible when the study initially took place. For more information, please read this study in its entirety.