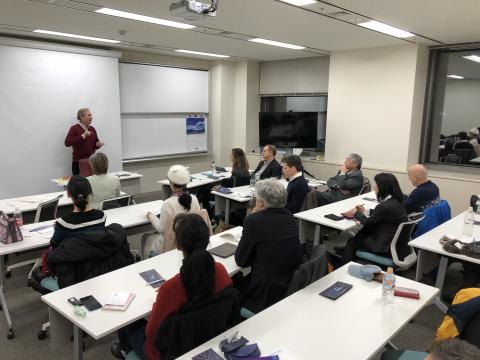 There appeared to be high interest in the meeting topic, Complementary & Alternative Medicine Exploration, as evidenced by the near record-setting attendance for an SSE-Japan event. Present were even a few other healing therapists interested in seeing the presentations by their peers. The first to speak was Chris Earnshaw, Ph.D. (originally a neuroscientist), who focused on his rather recent healing work using biomagnetism therapy. Chris began by explaining how NASA discovered the importance of maintaining magnetic fields for the health of astronauts on long term space assignments. He talked about his successful recovery from severe asthma using biomagnetic therapy and how he successfully treated Parkinson patients resulting in significant ablation of advanced symptoms in many cases. The Parkinson disease clinical study was a medically supervised project (clinical research) at the Tsurumaki Onsen Hospital (600 beds) in Tokyo. Much of what Chris talked about is highlighted on his bi-lingual website at https://biomagnet.jp. Chris speculated that the therapy realigns the body`s energy fields and probably corrects pH imbalances in regions of disease or damage. However, the key sensitivity points appear not to be the same that are important in acupuncture.

The second presentation was given by Hari Tahil, with assistance from Petya Lowe, both from LifeForces clinic (https://www.lifeforces.org/). Trained in chemistry, Hari talked philosophically and theoretically about the universe and our concept of reality. Energy and information are key concepts that the universe presents, which are interpreted by our human senses in a manner particular to the human race. Alternative healing methods are believed to employ energy or information in a way that humans are poorly equipped to recognize and flagrantly ignore in modern materialistic mainstream science. The concepts Hari and Petya discussed were surprisingly consistent with thinking and speculation presented at the prior SSE Annual Conference. It was claimed, that during actual healing sessions at the LifeForces clinic, the type of therapy applied can be quite varied, from specialized physical therapy techniques to more exotic energy healing. Having experience and talent in a large spectrum of therapies, allows the healers to apply the most effective technique for a given situation and person.

Personally, I felt that all the presenters had great credibility, partially because the speakers were formally educated in the sciences and could explain or speculate on concepts in biology and physics with deep knowledge and logic. Of course, there were no “real answers” given to the mechanistic process of the alternative healing techniques illustrated, but much evidence supporting the validity of such approaches were discussed