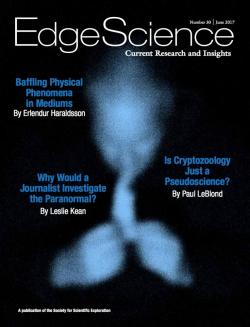 THE OBSERVATORY
Why Would a Journalist Investigate the Paranormal?
By Leslie Kean

FEATURES
Baffling Physical Phenomena: Differences in the Phenomenology of Some Famous Physical Mediums
By Erlendur Haraldsson

Is Cryptozoology Just a Pseudoscience?
By Paul LeBlond

REFERENCE POINT
The Psi Race Between East and West: More Hype Than Reality
A book review by JOHN ALEXANDER of ESP Wars East & West: An Account of the Military Use of Psychic Espionage as Narrated by the Key Russian and American Players by Edwin C. May, Victor Rubel, Lloyd Auerbach, and Joe McMoneagle

Members support the magazine, and get new issues in their email inbox.

Buy a beautifully printed copy of any issue from MagCloud.